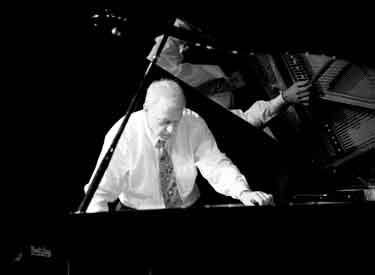 For one person to walk onto a stage and tackle a piano is a step of boldness. Guts and grit are every bit as much in the mix as talent and practice. When that solitary person walks on to play a work by George Crumb, boldness becomes even more essential. When the audience is used to stories instead of sonatas, and the venue is not even a concert hall, the boldness factor multiplies.

In a strikingly bold move, Village Players Theatre presented Oak Park pianist W. Perry Johnson as the draw for their annual fundraiser Saturday, Nov. 10, and in a repeat Sunday matinee. Johnson’s performance of George Crumb’s “Five Pieces for Piano” from 1962 was the highlight of the evening. Somewhat self-effacing, he told the crowd, “This is pre-Beatles music, but even though it is so old, it has remained very controversial. I wouldn’t be surprised if you felt like booing.”

Johnson was more apologetic than needed, for the performer of this work, unlike the other more conventional works on his program, ought to be seen, and even scrutinized up close to appreciate the full effect. The VPT staging and lighting was perfect for reflecting Johnson’s hands and arms as he reached inside the piano to pluck and brush the strings. The immediacy of sitting close to the stage with excellent sight lines added to the dramatic impact.

American composer George Crumb, winner of both a Pulitzer Prize and a Grammy, has made a name by not sacrificing impact for the sake of innovation. To his credit, he has expanded the capacity for producing acoustic sounds in tandem with electronic means, without confusing the listener. In replaying this work, Johnson artfully produced sounds that are commonplace today-from the threatening crescendos of a game arcade to the inane chirping of a vehicle moving in reverse. But he did it with nothing more than his hands and about 200 carefully tuned strings. This feat gave the partygoers at the gala something to talk about. (There was no booing.)

Though in most cases I would strongly argue against mixing and amplifying the sound of a well-built piano, in the case of Crumb’s ethereal and primeval soundscapes, the electronic amplification served to enhance the timbral variety. Crumb specified in his score that a piano may be amplified in large halls. Although that wasn’t the case here, the digital doctoring still did not impede the composer or performer’s intent.

Johnson aptly compared Crumb’s exploration of musical colors to Ravel’s in “Jeux d’Eaux (Water Games),” which followed. Having studied in France in the company of older musicians who had known Ravel was a distinct advantage for Johnson. Other works on his program included Beethoven’s stormy “Moonlight Sonata,” which unfortunately lacked storm due to the limitations of an overly-small piano, and Chopin’s A-flat “Polonaise.”

The solo pianist was not the only bold move to be noted at this gala event. On a grander scale, sustaining a local theater company in itself is an act of boldness, especially given the shaky past when VPT once teetered on the precipice of folding altogether. In what portends a more stable future, courageous artistic director Carl Occhipinti and friends have just completed a full renovation of the physical space. A small black-box performance site, the “Play Ground,” is now open in addition to upgraded light and sound systems in the main theater, and something that will hopefully go unused: improved fire escapes.

The new facade on Madison Street (dare I describe it as bold?) bespeaks the “fine” in the fine arts and a sparkling new lobby leads the way to a season of cabaret, Bernard Shaw, Tennessee Williams, and musicals.

So here’s a toast to the souls who dare to chase their bold dreams, from George Crumb to Village Players. For details on upcoming events, go to http://www.village-players.org/ or call toll-free 866/764-1010.